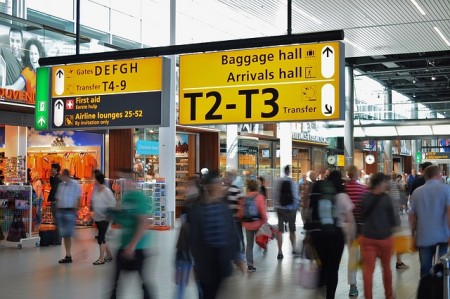 Just as I thought our Kenya experience was over we landed with a 4.5 hour layover in Nairobi.

A Kenyan employee who navigated our baggage from one terminal to another advised us to get a cup of coffee at an outdoor cafe because of our long wait.

When we got there, only a partial table remained unoccupied. A young lady sat alone guarding a pile of luggage. I asked her if she minded if we sit and she said no.

I eagerly approached the counter for my first cup of coffee in almost 2 weeks while my friend, Bud, sat with our bags. When I returned, I found Bud in conversation with the one girl, as well as her friend. He wanted to get a drink and told me he was up to the point where we got to the library and I could continue from there.

As I sat down, I sensed God had a different conversation in mind. I asked them where they were from and what they were doing in Kenya. They told me they were from Denmark and just finished a 5 week stay at a hospital volunteering as assistants in a maternity ward in a rural hospital. They had just graduated nursing school and were hoping this experience would help them find a job when they returned.

I asked them about their lives in Denmark and if they ever heard of Loveworks, a ministry started by a friend of mine in their country. They said no, but asked what it was. I tried to explain, but remembered from Weyman how foreign the gospel is to the Danes, so I began to talk about love. I asked them if they ever heard of the “love chapter” in the Bible. They didn’t understand.  I asked them if they had ever read the Bible. One said she read a few pages, the other shook her head. Instead of talking about it, I suggested I read it to them and they agreed. They were very attentive and remarked at how beautiful the words were to describe love.

I felt energized to continue and began the discussion of Who love is. I told them about Jesus and how He went about showing what love does and teaching how man should behave. He amazed some and aroused others to anger. I told them what Jesus said about being born again, the nature of man, and the invisible nature of the spirit within each of us, as well as the Holy Spirit in the affairs of man. Our conversation was so natural and easily entreated that it was sprinkled with laughter.

We talked for close to two hours and it flew by. We talked of sin as being a serious issue because of its deceitful nature and power to separate us from the life we  desire. The Holy Spirit was flowing with illustrations that hit home, but I realized it was time to close. Throughout our conversation, I emphasized Jesus’ words that we must be born again.

“Before we leave, I must tell you one more illustration,” I began. “Have you ever seen the movie where the villain is enraged that the beautiful young maiden ignores him and gives her heart to the hero. In his anger, the villain ties her to the railroad tracks and gags her. But even in her muffled cries the hero is alerted and rushes to save her on his white horse. As he rides in a fury to the rescue, the train is also rushing towards her. As the maiden’s heart pants in fear he jumps off his horse and races to her side, cutting the rope and lifting her in his arms. He then picks her up and gently places her on the horse behind him. Together, they ride off into the sunset.”

“That is a lovely story, but it is a fairy tale,” Amaelia said. “Perhaps,” I responded, “but the truth is, you are both on the tracks of life and the train is approaching.” Jesus is riding towards you with rescue in mind. He longs to take you as His own, if you will let Him. I am a father of two grown girls and five growing granddaughters. A strange thing happens to me when God’s Spirit began His work. I gained a fatherly concern for the lives of other girls in a world that poses so many threats. Before you begin to think, “Why did I let these two old men sit with us in the first place?” Let me tell you. God appointed this time and this place. He did this out of His love for you. I don’t doubt that someone has been praying for you. Perhaps even the Kenyan family you stayed with.”

Both of their eyes lit up as they looked at each other. Rekki said, “They prayed all the time!”

They told us how loving this family was to them and how they all cried when they left and even now miss them. “I can imagine them crying out to God on your behalf, ‘O God you must protect these girls! Save them and bring them into Your kingdom!’ I doubt there is a power on earth that can match an African mother’s cry other than an African grandmother.”

“Bud and I will also pray for you as fathers would. God’s love for you has been invested in us and that is why we are here. Don’t be surprised when people and circumstances enter your life and remind you of this meeting. You will be tempted to think “How can this be true, why has no one else told us this?” They looked at me as if I read their minds.

“There is a real villain. He not only wants you not to believe what we say, he wants no one to believe Jesus. That is his greatest ambition.”

“Is he the fallen angel?” Amealia asked.

“Yes he is. But Jesus not only came to save you, he came to destroy the works of the devil. Not only does He want to rescue you, He wants to use you to rescue others. Your love for the people you met and your desire to help is actually His will.”

Jesus said, “If anyone does My will, He will know if My words are my own or if they come from God.”

They were both extremely grateful and assured us they would take it all to heart. They said they never heard anything like this before and seemed sad that we were leaving so soon.

The Irishman, a Story of Divine Connection