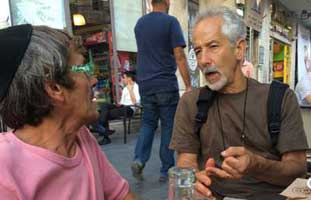 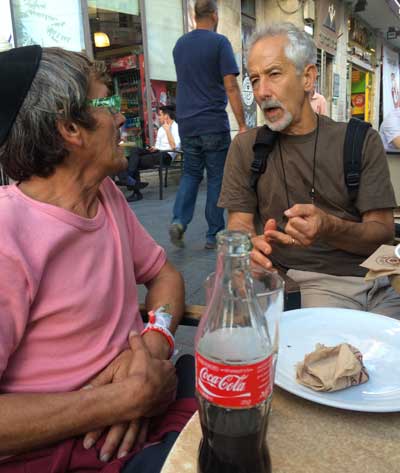 “Anything, even a shekel,” he begged in a raspy voice.

He knew it and I knew it. My problem was that I was getting used to beggars in Jerusalem. There are many. Unless you walk the streets, you wouldn’t see them. In fact, most Americans don’t realize that the poverty rate in Israel is among the highest in the Western nations.

Even one shekel would help

“I didn’t ask if you wanted something,” the frail little man said with a nearly toothless smile. “I’m asking you for some shekels.”

“Even one shekel would help.”

He got my attention. I was embarrassed by my careless response. My heart suddenly felt the familiar twinge. I once told myself I would not grow callous to the needs of those around me. I reached into my pocket for some shekels.

I gave him some and then went into the open coffee shop and ordered some drinks for our small group and gave God my full attention. I went back to my soon to be friend and asked him if he was hungry.

With a full grin, which showed even more missing teeth, he said yes in good English, but with an unusual accent.

He came with nothing

His name was Mario and he was from Argentina. He was 49 years old and was being treated for lung cancer. His Rabbi told him that he should apply for the “right to return” and move to Israel for treatment. In Israel’s constitution, there is provision for Jews the world over to come “back” to the Land and be welcomed as a citizen. That is unless you are a Messianic Jew, but that is another story.

Mario came with nothing, but was getting thorough treatment in a very good hospital. He was grateful the government was helping him to live in Israel. Beyond his medical care though, it was not enough to live.

We sat together outside enjoying our coffee and tea as the evening breeze began to cool the Jerusalem sun. Mario ordered pizza. He wanted to share it with everyone, so he ordered a full pie. I couldn’t help liking him.

Why do you think you know more than the Rabbis?

Before long, the Lord prompted me to steer the conversation towards His love for Mario.

He had no trouble agreeing with me. In fact, he readily accepted my belief in Yeshua. He simply, yet firmly, assured me that Jesus was a good man, but a man nonetheless.

I began the textbook approach of pointing out some prophecies that Yeshua fulfilled by His coming.

“You say you believe the prophets. Do you actually think that one day a man will ride through these modern streets on a donkey and be welcomed?” I asked. “Everyone would think He was crazy, including you. In fact, he would be arrested long before he entered the city for obstruction.”

Mario smiled unconvincingly, but came back with a familiar response.

“Why do you think you know more than the Rabbis?’

At that moment, I realized that my attempt to convince him about who Jesus is was not in sync with the message of “Comfort My People.” He didn’t need a debate. He needed to know that God was in our midst. I sat in silence while he ate his pizza and offered slices to the others.

“So, tell me about yourself, Mario. What was life like for you in Argentina?”

He began to tell me about a lonely and broken past and how much he misses his younger sister, his only family. The Rabbi told him that it was better for him to leave for Israel because the hospitals in his country could not help him and his sister had children that needed her. He would be too much. Mario agreed and left for Israel, alone.

He began to sense that I actually cared about him, but it was time to go. I asked if I could pray for him, but I told him that I would pray in faith and my belief in Yeshua because He is the Messiah.

He finished his last slice, closed his eyes and said, “go for it.”

I said goodbye sadly, knowing I had no way of keeping further contact. Or so I thought.

A few days later, we moved locations to a guest house in the Old City. It is one of my favorite places, almost a world apart from where we were staying. One afternoon, we were returning through the Jaffa Gate when Jason asked, “Is that Mario?”

Sure enough, there he was sitting on the edge of a stone bench. I felt so glad to see him. As I approached him, his face brightened as if surprised with that familiar grin.

I was convinced this was a Divine setup, but unaware of the lesson I was about to learn.

As we began to talk, he grimaced in distress. He had been given another round of chemo and his hip was causing him pain. Again, I asked if we could pray for him. He was welcome to the idea. I told Mario that Jason was a doctor, but knows that only God can heal him.

He had no problem believing that. When we finished, I continued our conversation.

“There’s no doubt, Mario, God loves you and wants you to know that.”

“I know God loves me, Paul. He has made that very clear. You don’t need to convince me.”

I felt like a left hook just landed on my jaw. I stumbled to recover. Our conversation was one-sided after that. It was awkward. In an attempt to gracefully leave, I told Mario that Marla and I were celebrating our 40th anniversary the next day and I needed to talk with her. He thought that was amazing and let me know.

“That’s your silver anniversary, you better go.” He congratulated me and Jason and I went on our way to the Guesthouse. I turned around, still in view of Mario. He smiled at me and said, “Paul, don’t work so hard. Just live.”

I was struck. I turned towards Jason who was still walking and told him that I think God is trying to teach me something. Jason stopped for a drink and I walked back. I headed for my favorite juice stand. I felt awkward though, as I considered Mario. He was my lesson. It was becoming clear.

Again, the smile, “Absolutely!” he exclaimed. As we waited for the young Muslim man to squeeze the juice out of pomegranate and grapefruit, we began a new discussion.

“You have the eyes of a good man,” he said to me with his eyes fixed upon mine.

I don’t know if it was the heat or the inner work of God’s Spirit, but I felt so humbled.

“What you see, Mario, is not me. It is the Presence of God in me. I was once a very self-centered man who was deeply troubled by life. I cared very little about the needs of others.”

“What do you mean,” he asked, “you used to sell drugs and stuff?”

It was clear to me that he was no stranger to that way of life.

I confessed that I did many things that were wrong and none of them was I proud of.

“Like you, I didn’t know where to look for answers, certainly not to Jesus,” I continued. “How could Jesus help me if my people killed Him? At least that was what I was lead to believe and that was why we were so hated.”

His tone changed, “Let me ask you a question, Paul. When you come back to Israel and you see me as man who is well and I have a position of influence and I have what I need to live and more, will you still talk to me the same way?”

“Mario,” I answered, “I would see you as no different. I am not trying to fix you, I simply want you to know what I know about Yeshua, that He is the Jewish Messiah. The truth is, I believe He will heal you and establish you and that you, Mario, will teach others about Him and they will listen to you. You have a future Mario and I look forward to seeing you again.

He stood up with me and we embraced. He gave me a kiss on the cheek and with a great big toothless smile, he told me he loved me.

We said our “Shalom,” and parted. I left confident that God is capable to complete that which He started.

The Jeweler, a Story of Leh’s Man of Peace