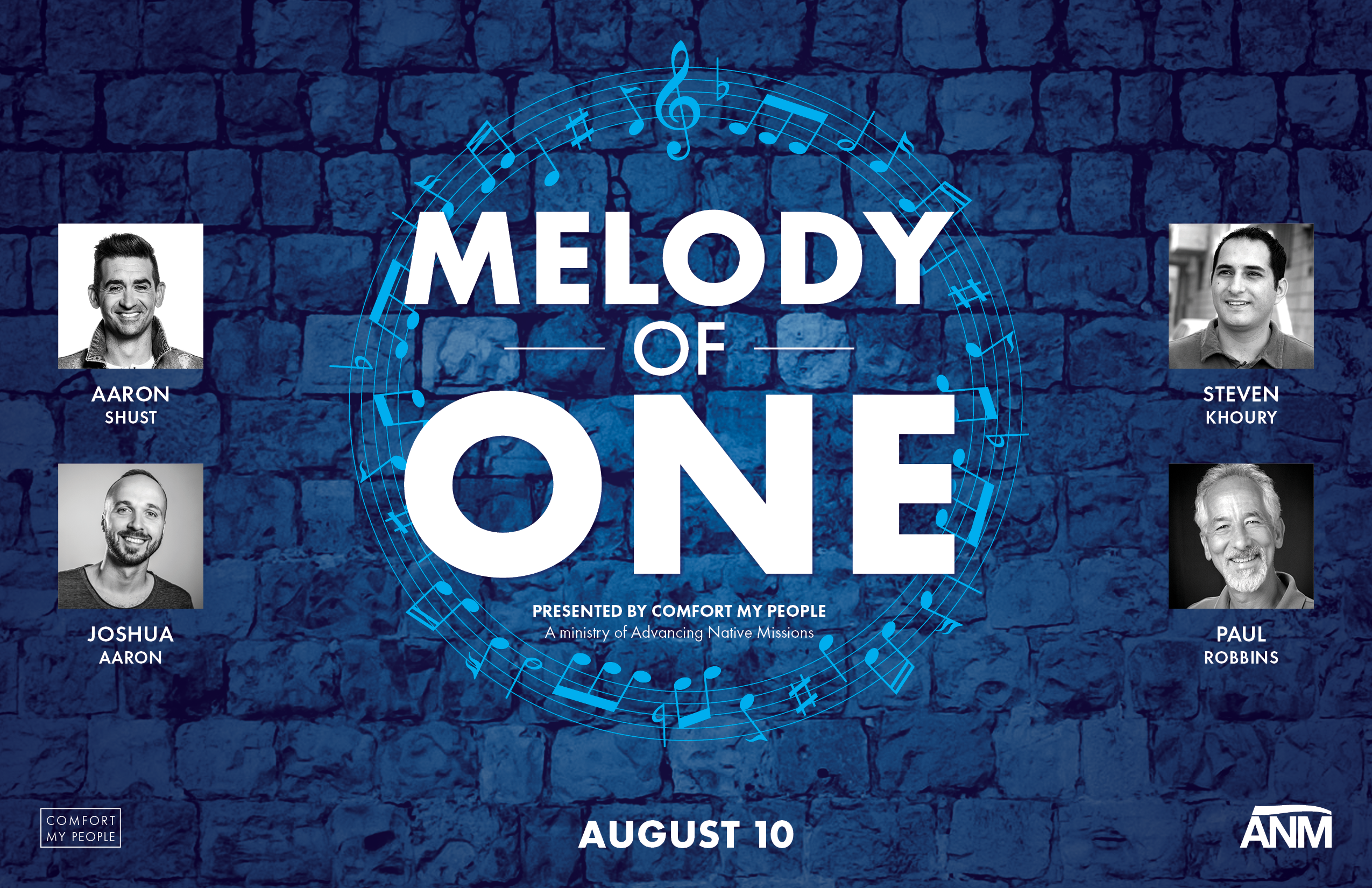 In 2017, Comfort My People’s yearly Israeli Advocacy Tour visited Nazareth village, a condensed replica of the town as it was in Jesus’ day. The tour concluded that day in the synagogue where Jesus would have given his last message before he was driven from the town.

Our Messianic tour guide gave such an inspiring description of that moment that I felt compelled to pray for him before our group departed. I stood next to him in the spot where Jesus would have spoken His final words in Nazareth:

“Today this scripture is fulfilled in your hearing (Luke 4:21).”

Only a few moments before, a woman on our tour who was so taken, asked me if we could worship in the synagogue. I replied, “Absolutely, but who will lead us?”

Then I saw them.

Two silhouettes of men standing on the sides of the arched entry. The sun was shining too brightly on their backs to make out their faces. I immediately walked towards them because they were leaning on guitar cases.

As I did, I recognized Joshua Aaron, a Christian worship artist and composer who is well-known in Israel. I was shocked, but seized the moment.

“Shalom Joshua! Would you be into leading us in worship?”

“Sure,” he answered as if he was waiting to be asked. “This is my friend Aaron Shust. Can he join me? He just flew in from Romania?”

The rest is history. Our group was instantly immersed in a worship event – one none of us had planned – in the house where Yeshua should have first received it. It was astounding.

After we broke up, I asked them if they do this often and they said they didn’t. I asked them individually if they would be interested in doing something like this on a bigger scale in the United States, to which they each replied “yes,” so we exchanged contact info.

Once I returned home and came down from my cloud, I realized that I had never organized an event or a concert before.

As the days went on, “normalcy” returned and the idea grew distant, until the night I awoke at 3:00 a.m. and sat straight up in my bed. I don’t know if my eyes were still closed, but I saw the words “Melody of One” like a banner with a circle made of musical notes. I immediately knew it was “game-on.” The event I had in mind was not just going to be a Messianic concert, but a message which God was about to reveal.

However, I had another lingering concern which seemed unrelated at that time. As the Director of Comfort My People, God made it clear that our ministry had to be a witness to the Palestinian people, not only as a humanitarian effort, but as a vivid display of the love of Yeshua to the Arab neighbors of our Messianic partners. From their beginning, the Jews were called to be a blessing to all the nations through all the families of the earth. I firmly believed that Comfort My People should play a role in this, but had no idea of how. However, I sensed that it had something to do with Steven K.

In 2014, I was invited to meet Andrew White, the Bishop of Baghdad, who was famous for his high-level attempts towards reconciliation among leading figures in the Jewish and Muslim worlds in the Middle East. I spent a morning with him along with the others who accompanied me at the apartment where Andrew stayed while in Jerusalem. Although Comfort My People was an infant ministry at the time, he expressed a genuine interest in our vision and offered a word of encouragement and direction. Before we left, he said I needed to meet Steven K.

I soon began to hear more about Steven and his father and the unique reputation they had with the Messianic community in Israel. However, my focus remained on building partnerships with indigenous Israeli ministries that were reaching the Jewish people with the Gospel. In order for the Gospel to go into the nations, it must first be reignited in Israel. That means that a connection between Palestinians and Israelis that can produce true and lasting peace must proceed through that blessing. Every political attempt at a Middle East peace treaty has failed and will continue to do so.

Then, one day, I got an email from Ruth Graham, the daughter of the late Billy Graham. In it, she wrote of an unusual encounter she had had in a hotel elevator.

She was leaving a conference on the persecuted church held in Washington, D.C. When the elevator door opened for her, she noticed a man who spoke at one of the sessions. His name tag read, “Pastor Steven – East Jerusalem.” They talked for only a few moments, but she was so taken by him that she said, “You must meet my friend Paul Robbins.” She followed with a brief description of Comfort My People. They exchanged cards, one of which she gave to me.

When she told me about their conversation, I knew I had to contact him, if for no other reason than to invite him to speak at our event. Over the next few months we spoke several times by phone and each time our friendship grew deeper. We finally met in Jerusalem and the deal was sealed. We were both convinced that God was in the midst of something bigger than we could conceive.

Soon I found a church for the event and an agreed upon date, and my education began. The biggest lesson to learn was the message. Amidst all the excitement surrounding this endeavor, the message was still paramount. It eventually became crystal clear:

In the way that only God can do, he shouted this message, but in such a subtle way that it has been overlooked for centuries – overlooked, but just as true as when it was first proclaimed. It is a melody and it is a powerful declaration to the forces of darkness that the church is ready to do business. God has bulldozed the hostility between Jew and Gentile and paved the way for the kingdom of God to be made known throughout the world. We see this bond at work in the Messianic community in Israel and we want to display it as a witness to the nations – especially America.

Then came one more indication that Melody of One is God’s message for today.

As Steven and I were finalizing details over the phone, he asked me to remind him of the date. To be certain, I looked at my calendar, which happened to be a Jewish one. When I did, I noticed a small flame that I hadn’t seen before on the date for Melody of One. Beneath it was written: “Tisha B’Av.”

“Brother, it is on Tisha B’Av,” I gasped. He was shocked as well.

Tisha B’Av is the most dreaded day on the Jewish calendar. It is the day when the first temple was destroyed in Jerusalem by Babylon and the second one by Rome. It marked the beginning of captivity after the first and dispersion or Diaspora for the second. On that day, the Crusades began and 10,000 Jews were executed. In three separate centuries, on that day, the Jews were expelled from France, England, and Spain. On that day, Himmler received the approval from Hitler to begin his master plan called “the Final Solution.”

I don’t recall Steven’s response, but I remember the sound of his cracked voice that he too was overwhelmed by the weight of what God was in the process of revealing.

It is now his time to bare his arm through a show of strength and unity that can only occur through the willingness and commitment of followers of Jesus-Yeshua.

This has been and still remains, his “eternal purpose,” and it comes wrapped in a melody…a melody of one.

The night of Tish B’Av and Melody of One last year was a beautiful and powerful display of worship and commitment. May this day be dreaded by the forces of darkness from here on until the day of Jesus’ return.

*****This year’s Melody of One event is going to be held on August 10, 2019 at Evangel Church in New York City! Don’t miss out on this incredible opportunity to join in a powerful night of Messianic worship with well-known Christian worship artists Aaron Shust and Joshua Aaron.

Comfort My People Director Paul Robbins and Palestinian pastor from East Jerusalem Steven Khoury will also be joining to share about the incredible work God is doing through Messianic believers to bring the wonderful news of Jesus-Yeshua to Israel.

Tickets are still on sale. Don’t wait. Purchase yours today!*****

The Rock and the Roots (Part 2)