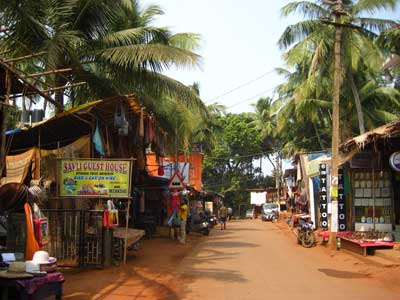 I am a firm believer that God gave man coffee.

I suppose tea also applies, because either one can open the door for meaningful conversation. What would otherwise be an ordinary building, a coffee shop can be a place where lives are transformed in a community setting.

Alex and I were sitting in the back of a very tiny one in Arambol, India when two Russian men sat at the table beside us. It was very easy (natural) to enter into conversation with them, especially when they heard we were Americans. It seems that America is famous again.

In case you don’t know, Russians have a reputation of being loud and proud. The four of us were actually getting along very well. They listened intently when we spoke of our personal relationship with Jesus. Apparently, we had a larger audience though. We were told later that the entire coffee shop was on edge wondering if a fight would break out between the Russians and the Americans. Two of those perplexed faces were sitting at a table diagonal to ours, Mohammad and Seema.

I felt a strong urge to meet them before they got up to leave. So, I left Alex in Russia and walked by their table. They invited me to sit.

They were a handsome couple. Mohammad, who preferred to be called Meta, was from Iraq and Seema from Assam, India. They were very interested in knowing why we were here, which is not easy to answer without disclosing our mission. However, our gray hair made us stand out in this youthful town. Aside from an occasional leftover hippie, we were a tiny minority, subject to wonder. It played to our advantage and our conversation shifted from us to them.

Alex soon joined me as we hugged our Russian friends farewell. Meta and Seema were very focused. They were resolved to discover spiritual truth and how to navigate into a world that was so unstable. I shared my testimony with them, because it began when I was their age.

My compassion grew towards them as they listened intently. There wasn’t a hint of argument within them. They seemed out of place in this strange town. They were not here to party, but to discover a deeper understanding of life. Oddly, they were both quite successful in what they did. I asked if they knew what it meant to be born again and they did not. I explained to them that God created us in His image with high ideals and almost no limitations, because we are the crown of His creation. Yet He also knows that we are incapable of living by His design, unless we receive a new set of operating equipment.

“That is what the Bible calls the New Covenant,” I told them. “It offers all of us a new nature made in the likeness of Jesus, one that can think His thoughts and feel His heart along with power to live in a way that makes a difference in our world for goodness sake. It’s called righteousness.”

I told them that we just left Caring Hands ministry as an illustration.

“After many years of serving the children of Devadasis (Temple prostitutes), four hundred girls have grown up under their care,” I said. “Their ministry has an ongoing legacy of young ladies who have been freed from the decadence of their culture that would have otherwise employed them. Most, if not all of the girls raised in their home, decided to trust Jesus personally. As a result, their lives took a 180 degree turn towards righteousness and compassion. These girls are amazing and they are making a difference in this world.”

That opened their eyes wide. Mohammad is a Muslim from Iraq. He served in military intelligence, working alongside US troops. His belief in Allah assured him that He would be protected as long as he served Allah. One day he tested his faith. He purposely did not pray as was his practice five times daily.
That day they were told to prepare for a major advance. The U.S. soldiers he accompanied, however, were Christians. He watched them gather in a circle and call out to Jesus for guidance and protection. Then they left together for a bloody battle.

They all returned unharmed. From that day on, Mohammad stopped praying to Allah. He recognizes there is something about Jesus that is different and powerful, but still not personal.

Seema, very meekly, broke into the conversation. She told us about her family. Her father is a devout Hindu, but her mother is a devout Christian. Seema grew up not knowing what to believe, but she kept her belief in two different worlds. She loved her parents, but kept her Hindu gods in case her mother was wrong.

They raised her to consider the poor and always set aside money to give to those in need. Eventually, her parents started a ministry which includes a feeding program and a school. A portion of Seema’s income goes to them.

“Do you have a prayer gathering?” She paused to ask.

“My mother is dying.” Her eyes began to swell with tears. “Ten months ago she was in the hospital and the doctors said she would not live through the night. But my aunt came to her bedside and with several of her Christian friends, they began to sing and pray for hours.” The next day she awoke and the doctors were amazed at her improvement. She has done well until now. This time though, they are confident that she will die. Please pray for my mother,” she could barely continue, “she is dying.”

At that moment, I could barely restrain myself from my desire to hold her in my arms like I would my daughter.

“We don’t have any gatherings here, but we can pray right now, if you like.” They both agreed and in a moment that German coffee shop became a sanctuary of tears and supplication to the God of all compassion.

We departed with warm hugs of appreciation, yet with a deep longing for God to do a miracle in her mother’s body. To date, I have no knowledge, but since you have read this far, I trust you, too, will cry out for not only Seema’s mother, but for these two precious people to come to faith in Jesus.

The Jeweler, a Story of Leh’s Man of Peace

Mintu and the Girls from Taiwan