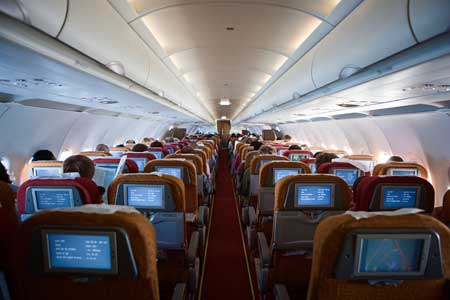 When I make plane reservations for myself or team members, I try to reserve aisle seats for a few reasons.

First, it is the “servant seat.” It provides the advantage of helping the flight attendant and those seated beside you to pass trays and trash back and forth. It is easy to move into the aisle in order to ease the awkwardness of your companions’ need to go to the bathroom without falling into your lap. These two opportunities make openings for meaningful conversation.

The other reason is I find it more comfortable to stretch my legs, especially on a long flight. To be honest, that is what raised my feathers when I saw someone’s “stuff” on my seat. As I waited for her to return from a bathroom visit to discuss this matter, I was already breaking the first rule of conduct by creating a traffic backup. I noticed a cane in her pile of stuff and prepared myself to give up my cherished seat.

That is until she returned and said, “This is my seat.”

“Actually it is my seat,” I returned.

I realized my witness was just tampered with and replied, “But if you really need it I will trade you.”

She nodded and I reluctantly sat down at the seat that should not even exist, especially nestled between large people who in their minds have claimed both arm rests. In this woman’s case, she even rested half of her large bag on my tray table.

It was clear that God was out to prepare me for the long journey and I needed grace. My only option was to humble myself.

So, I began the process by introducing myself to those who boxed me in. The young man on my right was from Denmark. His name was David.
“David? Did you know that is a Biblical name? It means ‘beloved,” I began. “He was Israel’s greatest king and beloved by God.”

“Yes, I have heard that,” he smiled politely, hoping this conversation would quickly end and he could retreat back to his newspaper. David was from Denmark. He was visiting his friend for a few days in Tel Aviv who had a government position in the Embassy. David also had a government position in Denmark overseeing the academic curriculum in their public school system.

I have learned from my friend Weyman who has spent years in Denmark that Danes are very reserved and have very little knowledge of the Bible.

I asked him about the social condition and life in Denmark and he said they were fine. In fact just about every question I asked brought the same answer. So I got personal.

“Your job sounds like you have a lot of influence. What exactly do you do?”

With very little emotional energy, he told me that he is responsible for ensuring that the approved state curriculum is being properly used throughout the country.

“Wow, that sounds like a lot to deal with along with all the turmoil and unrest that are plaguing Europe,” I said, hoping to get a rise.

“That does not really affect us,” he answered.

He did agree though, that we were in a troubled world. I told him I had an explanation for that if he didn’t mind my telling. He didn’t seem eager, but I began anyway.

I started at Genesis with the Spirit of God hovering over the face of the creation, which God just formed out of nothing. Then I told him about Adam and Eve, their perfect environment and their fateful fall. Their free will choice to ignore God’s council and accept the serpent’s began a downward spiral whose effects we still feel. I poll vaulted to Jesus and asked if he was familiar with Him.

“Not really,” he answered shamelessly. Sadly, but not surprised, I continued.

“We live in a spiritual world, David, but most people fail to take notice because it is invisible.”

He seemed perked up a bit, putting his paper down. As I was talking to him, a crowd of security officers and flight attendants gathered right beside our row and opposite his seat. They began rummaging through the belongings in the compartments of the row next to us. They rapidly began pulling the seat cushions out in search of something. The woman to my left stood up (so much for the cane), and took a photo. The Turkish stewardess yelled at her to sit down, but not before asking her why she was taking a picture. I felt like I was in an espionage movie for a moment and then they departed with no evidence. David seemed a bit shaken up.

I tried to re-engage, but he was gone.

With a nervous smile, he politely told me, “I would like to resume reading the newspaper, if that is ok with you.”

I told him that was fine and I retreated to my enclosure.

Well into the flight, I turned to him again and asked if he ever heard of “Loveworks.”

I told him it was a ministry in Denmark began by friends of mine. I explained its core values based on 1 Corinthians 13, known as the Love Chapter, to which I had conveniently opened.

“Would you like to read it?” I asked, handing him my iPad.

He politely refused, so I read some portions of it aloud to which he listened. His interest seemed aroused, so I explained that this describes the life available to those who have come to believe and follow the teachings of Jesus by receiving His Spirit.

“David, the only reason I am telling you about this is because I like you and want you to know the most import message given to mankind.”

He thanked me for telling him and quietly returned to his paper, which was beginning to look worn.

I have learned the limitations of conversations like this, but I find great joy in the process. What happens next is God’s business. I have a funny suspicion though, that David and his companion had an unusual conversation in Tel Aviv that night.

Calev and the Subtle Nature of Divine Orchestration

Mintu and the Girls from Taiwan

The Master Designer: Weaving Together Lives & Circumstances for His Purposes