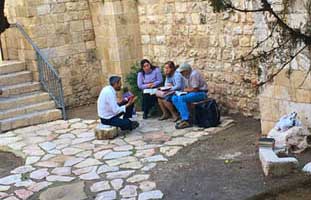 I love Israel and the Jewish people.

That became clearer to me as I awaited our departure from Tel Aviv this past November. I was on the phone to disconnect my Israeli SIM card, a necessary tool I used to communicate while I was in the Land. 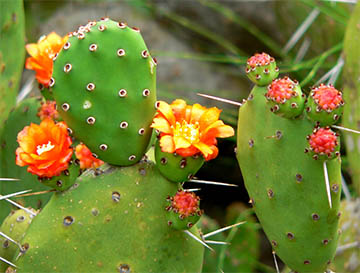 To avoid late charges, I asked the young Sabra (native-born Israeli) if we could somehow complete the transaction before I had to board my flight.

She had a respectful sweetness in her voice that has become familiar to me.

It is the voice of her generation.

God installed it first in Abraham and promised it would pass down to his descendants.

Blessed to be a blessing

God blessed them to make them a blessing. Ultimately, the God of creation would pass that sense of blessing through the Messiah and those who would receive from Him the power to become sons and daughters, through a new birth.

The sabra is a cactus fruit, prickly on the outside, but sweet within. It is the name the Israelis have self-imposed, because they see that trait within themselves. Many outsiders have been turned off because of this affront. They have not taken the time to peel the layers and get to the sweetness.

But my companions, on the other hand, did. I noticed the subtle nature of that process begin as we entered the airport in Tel Aviv.

Above the grand entry in the Tel Aviv airport is a sign that says “Welcome to Israel” in English. In Hebrew though, it says Baruchim Haboim, which means, “Blessed are they who come.” 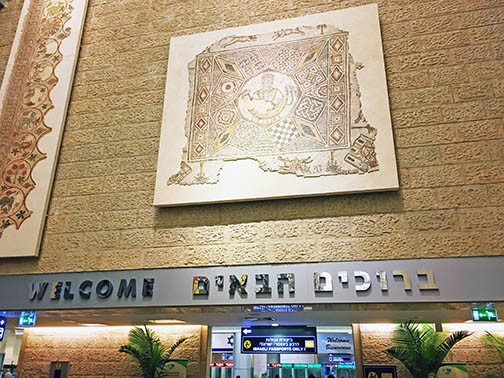 On our first visit 11 years ago, my wife, Marla, and I were transformed at that point. I saw that happen in Hannah and Joy as they passed through that opening. They both gasped. What I did not expect was my reaction.

It was as if God was revealing to me at that moment the reason I have been given the privilege of becoming the Director of Comfort My People.

The two ladies who passed through that doorway with us, as well as Jacob from Bulgaria, who would soon join us, were able to experience this concealed sweetness in the Israelis we would meet during our stay.

As that process began, something supernatural began; they became joined in heart. It is God’s eternal purpose (Ephesians 3:11).

A Growing Messianic Movement in Israel

To understand this, it is critical to know that the Jews have been forcefully separated from the Good News for over 19 centuries. Since the “re-birth” of the nation in 1948, the door has begun to open. 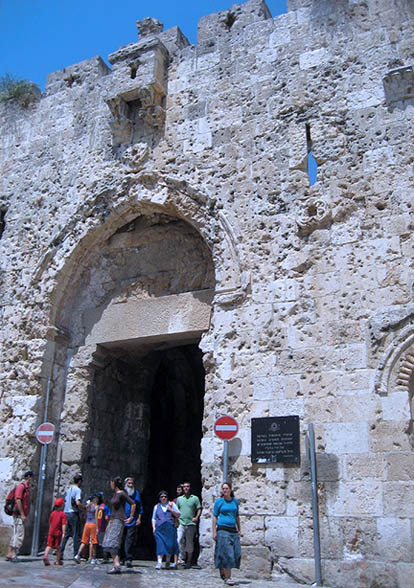 This defining work of God is largely due to the participation of Gentile Believers from several nations.

Their love for the Jewish people and the word of the prophets has provoked a Biblical “jealousy,” and brought the Messiah into a new light.

For millennia, the Jews have been accused of killing Jesus. Because of that sentence and their distinctive lifestyle, they have repeatedly come close to the verge of annihilation by those who called themselves Christians.

Who in their right mind would want to follow a God whose followers would behave in such a vindictive way?

The sacrificial love of Gentile Believers

However, through the sacrificial love of Gentile Believers, like the three who accompanied my wife and me, Jews in Israel are giving Jesus another look.

There is now a growing Messianic movement who are reaching their own in the same indigenous fashion as are ministries throughout the world.

That is why Comfort My People exists, to support their efforts and bring the saving love of the Messiah to places it has never before traveled.

We came to assist.

Our efforts began in Jerusalem

Our efforts began in Jerusalem with the ministry of Be’Ad Chaim, which means ‘pro-life.’ 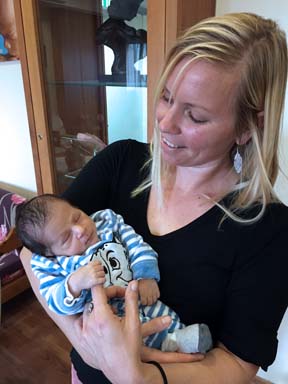 Sandy Shoshani is the Director with a mostly volunteer staff. They are devoted to bringing the tangible love of Yeshua to mothers, babies, and fathers who have decided to do what should be a normal human response when facing an event that all of our mothers face. That response is not to abort your child in the womb.

As a ministry, they face the national disgrace of abortion with compassion and discipleship.

They commit for one year to walk with the willing mother in need, providing goods and services, as well as companionship. It is a remarkable atmosphere on the days the women come to the office for a visit. The love of God fills the rooms.

Israel is a relatively infant nation. Because they are the only democracy in the Middle East, they have looked to ‘Big Brother,’ the US, as a model for entering Western civilization. Israel legalized abortion six years after we did as a nation.

The culture of death should never be exported. I feel a personal responsibility to do something about it. Supporting Be-Ad Chaim is one way to address this evil.

Months before our arrival, I asked what we could do to help. Our intended plans changed a few weeks before we arrived.

An Ethiopian refugee family in need

An Ethiopian refugee mother of five, who was also pregnant, came to their attention. She had no husband and was considering abortion. Someone brought her to the Be’Ad Chaim center and convinced her to reconsider. 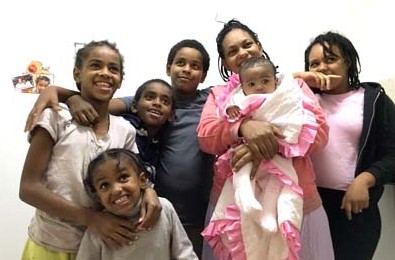 When a visit was made to her house, they were shocked at the horrific conditions. It was a 2-room rental house located in a back alley of Jerusalem.

Her roof had leaked for a long time, but the absentee landlord had no plans to fix it.

In our conversations with Sandy, we learned one specific thing that led her into this ministry, which last year alone served 350 women and their babies.

She came to Israel as a new Jewish Believer with many questions. Feeling very alone, she captured the nearness of Yeshua.

She found herself in decisive situations, which gave her the opportunity to choose if she would continue in submission to the Lord’s leading. With each episode, we noticed her weighed response was the same: why not?

If God is truly God, is it not reasonable to trust Him?

Even though we came with no tools and the roof repair seemed beyond our reach, the opportunity demanded a response.

Was God’s calling enough to proceed?

The answer was clear: why not?

Without any materials, we scrounged a few tools and a rickety homemade ladder from a neighbor and began the massive cleanup and repair with materials found and purchased.

Then, we went inside and scrubbed and scraped walls that were blackened by mold from years of neglect.

The tiny apartment was barely big enough for the seven of them, without having to share it with mice and roaches. The smell of poverty permeated their house. It was on the verge of being condemned.

We fixed lights and wiring and plumbing. We plastered and painted the kitchen and entry with two fresh coats of paint. 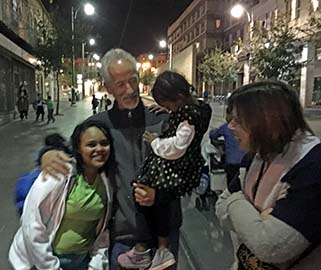 As we worked, we made friends with the mother and children. The ladies cuddled the newborn rescued baby.

When it came time to call the mother and children to see their new kitchen, we were humbled to see their faces light up with tears of gratitude, as if it were a million dollar makeover.

A few nights later, we were walking back from a Shabbat service in Jerusalem when we saw children playing in the normally crowded Jaffa street, not unusual on the Sabbath.

However, as we came near, they came running to us and the little ones jumped into our arms.

It was our Ethiopian family who lived over a half mile away. It was an unexpected, joyful reunion for us all.

As our time went on, we were able to offer physical assistance to three other ministries in Israel.

As much as they appreciated our work, I was repeatedly told how much it meant to them for us to bring such encouragement and practical support. 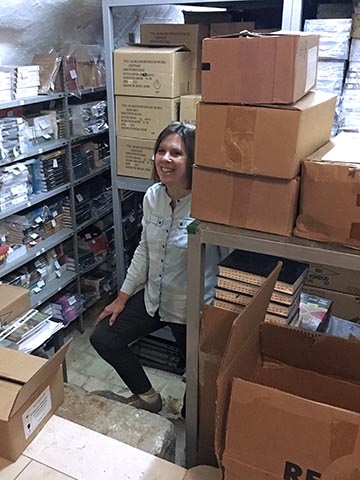 On several occasions, we sat with ministry leaders to hear their stories.

We heard of great trials and anguish of heart. Yet, underlying it all was the loyal love of Jesus, the Messiah.

In each case, we heard about the common thread that linked Gentile and Jewish Believers to advance the spread of the Gospel in the Land.

The power released in that process has shaped what is a dynamic movement in Israel today.

It has been God’s plan for the ages, though long neglected.

Most of the Bible was written and preserved by Jews.

And although the prophets and the apostles were Jews, and the Savior of the world is a Jew, they have remained an unreached people group for the longest period of history.

Why are Jews an Unreached People Group?

The answer is tedious, but it includes a history of enmity and neglect. However, history is in the process of turning a page.

It starts when a Gentile Believer, moved by the Spirit of God, does something to reverse a painful issue that has left sorrow in the heart of our Father.

He/she decides to be part of the solution.

Why not be a part of the solution?

Perhaps the Lord has also laid this burden on your heart. You may feel it’s too big for you, and you are ill equipped—or you may sense the urge to trust God for something you never considered doing.

If so, I have a question for you to ponder: why not?

Maybe this will help… the sign of welcome in the Tel Aviv airport is now incomplete.

Before Jesus returns (and this is critical), there will come a day when Jewish voices in Israel will cry aloud in great numbers, saying:

Baruch Ha Ba BaShem Adonai; Blessed is He who comes in the Name of the Lord (Luke 13:35).

Though paved with resistance, the solution is straightforward. The gospel of Jesus in its fullest sense needs to return to the Land of its origin. We now have indigenous Believers in place who can do just that. And they need our help.

Pray for Israel
We invite you to join with us in prayer for those sharing the Gospel message among the Jewish people. You can also visit our Pray for Israel page for specific prayer needs.

Support Ministries in Israel
If you are interested in making a donation, please contact us for information about how you can be a part of financially supporting indigenous ministries sharing the Good News in Israel.

Share This!
Use social media to help spread the word…