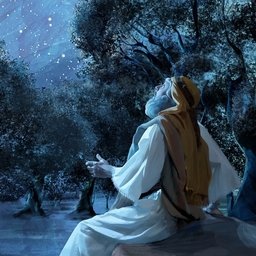 It is a rare occurrence for Hanukkah and Christmas Eve to begin at the same time, but it goes along with the times in which we live–unusual. This update may seem irrelevant to those of you who have neither children nor grandchildren, but that is not my intention. My hope is to portray God’s view of offspring as it relates to the Messianic movement in Israel today. Please read. 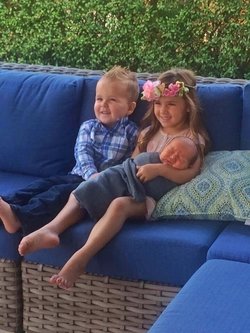 Shortly after returning from Israel, my wife and I flew to Florida to be with our two youngest grandchildren. It was our time to view life through the eyes and ears of a two and four year old while experiencing the inexhaustible marvel of new life. The next day, our daughter gave birth to our eighth grandchild. My mind began to draw parallels from my two adjacent journeys.

They say, “God doesn’t have any grandchildren.”

I humbly choose to differ.

Jesus made no exceptions when He said, “you must be born again.” There is no other way to enter Heaven once we die. However, the basis of the new birth is the covenant of blessing that was given to Abraham. We are born again primarily to be a blessing on earth. Heaven is a bonus. The blessing of Abraham was to be passed on to successive generations through Isaac and Jacob. Through Jacob’s offspring the blessing would extend to all the families of earth. In fact, God told Abraham that his descendants, who were called to be a blessing, would be innumerable. In other words, God, the Father of all, would also have many grandchildren. This was on the basis of faith, not genetics alone.

Although I am a grandfather, I am still a father. I made my share of mistakes as such, but the grace of God has prevailed through my many shortfalls. I thank God continually for our four adult children. Becoming a grandfather, however, is a very different role, one I feel more prepared for than when I became a father.

The list of basic ingredients for effective parenting is long, not so for grand parenting in most cases. My role as a grandparent has more to do with enjoying them and less to do with discipline. Of course, there is always a teachable moment along the way, but as a papa, I’m all about living life with them. Seeing as they see, hearing what they hear. It is sometimes tiring, but always refreshing. Their believing parents have raised them to be caring and compassionate, to choose words carefully, and to be helpful. They teach not only through words, but by example. The kids have also been taught to honor and listen to their grandparents. They not only listen, but also want to talk. They ask questions, good questions that lead to eternal matters. It gives me great hope. Nothing I have ever done makes me more fulfilled than seeing them grow up in the way God has designed.

The notion of descendants, or offspring, is one of the strongest themes of the Bible. The father of the faith is Abraham, but his story includes Isaac and Jacob. Abraham had a longing for his promised offspring.

I believe God has the same longing. His longing went well beyond Abraham’s. The joys of grand parenting originate in the heart of God. They follow on the heels of the sorrows, which accompany parenting.

The lesson of faith and willful obedience was to be passed down forever. We know the story though. It was laden with sorrow. So often, it appeared unlikely that God’s plan would be fulfilled through His chosen tribes. To be honest, I felt the same way. In the early years of my history as a Jewish Believer, I viewed the salvation of my people through the eyes of a skeptic. Witnessing to my people was a frustrating experience. The obstacles of history formed a pattern of resistance that seemed too much to conquer. The solution I heard from well-intentioned teachers was that one day God would bring about the salvation of the Jews through a great revival. Then Jesus would return before they could backslide.

That never sat well. It sounded quite foreign to Scripture, more like a fairy tale, as if God was going to sprinkle “Jesus dust” over Israel and dissolve the pains of Jewish history. I think the Biblical story is far more believable. It will happen supernaturally, but it will appear natural because it will involve people living life according to God’s design. That group will include both Jewish and Gentile Believers. They will provoke unbelieving Jews to jealousy because of their love for God, the Jewish Messiah, and for each other.

This has already begun within the land of Israel. It is evident amongst the generation of young adults who are children of believing parents, most of whom are grandchildren of the first generation of Jewish Believers in modern Israel.

Many years ago on our first visit to Israel, Marla and I stayed in the home of a Messianic family. At that time they told us there were about 5,000 Messianic Believers in Israel. When our friends were young, there were so few Believers that all the youth from all the congregations in the country knew each other. Now there are between 15-20,000 believers in the Messianic community. That may sound tiny to us, but like that fist-sized cloud in Elijah’s sky, this one is growing and it is carrying rain within.

On my recent visit, I traveled to four new ministry locations and revisited four others. This is what I return to report. The long awaited “grandchildren” of the Lord have arrived! The third generation of Jewish Believers in the modern state of Israel is flourishing in many ways. They are kind and loving, disciplined and creative, joyful and wise. They have begun to enter the role of leadership in the Messianic movement and they are making a difference. 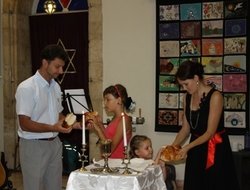 My first stay on my latest journey was in Tel Aviv at the Beit Immanuel Guesthouse, a ministry of the congregation bearing that name. Because the cost of living is so high in Israel, many live close to the poverty level even if they are employed. In order for ministries in Israel to function, they cannot rely solely on congregational giving to pay their bills.

The guesthouse generates an additional resource, and provides income opportunities for members in need. It also becomes both a work place of ministry to the guests, and an opportunity for Jewish and Gentile Believers to display the beauty of oneness for which Jesus prayed on His last night (John 17). Their Shabbat service (Friday night) was a joyous, festive event with penetrating worship and a challenging word. The people came from numerous backgrounds, but their love, respect, and hospitality could persuade the hardest of hearts to tears of repentance.

From there we went to Ashdod, a former Philistine stronghold and visited a Pastor who is leading a thriving congregation in the midst of an ultra-orthodox community. They are very actively involved in outreach to their growing immigrant community.

The day after our visit, they rented 33 buses and took 1,800 unbelieving Jews to an outreach in Tel Aviv where many of them responded to an invitation to Yeshua and extensive follow up.

Our next visit was in Netanya to a ministry that focuses on the poor and needy including widows and orphans. They have a very integrated humanitarian outreach, which is rooted in the love of Messiah. James would have been proud to see their faith in action. We stayed in the apartment of a Holocaust survivor who welcomed us with warm affection and hospitality.

The fourth stay was at a discipleship ministry in central Israel to the soldiers of the Israeli Defense Force. These Messianic youth begin their training before they go into the service at age 18. The girls are in for a bit more than two years and the guys for three.

They not only encourage them during their service, but also admonish them to be strong witnesses of the truth of Messiah as they serve with excellence. As a result, the Believers have a great reputation and are often promoted to leadership.

When they finish their service, many enter the three-month intensive Biblical training at the ministry headquarters. I was deeply impressed once again at the high level of Biblical skills they learn and how well integrated it is with prayer, personal devotion, and worship. They have learned the discipline of service and loyalty in the IDF and they apply it spiritually to all of life. We hope to unite with them in outreach ministry in India in the near future.

From there it was up to Jerusalem, but not before a visit with our first fruits ministry, Shlomy and Miriam in Rishon. We were mutually encouraged by the way God has joined us and made us a family (Mishpochah), united to serve. They said that the work we have assisted them in during prior visits has deeply impacted the people we served. 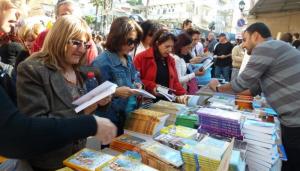 In Jerusalem, we visited our good friends in the Bible Society. The love that is generated in their outpost on the edge of the Old City is like no other building on the block.

Then to Be’ad Chaim, an amazing ministry of love and support to women who decided not to abort their unborn child. Again, we received a warm welcome because we have proved we are serious to serve and advocate for their efforts to end abortion in the Land as they share the love of Messiah in their life-saving efforts.

That afternoon, Jim Shutz, the Director of the Joseph Project, met us for fellowship and mutual encouragement as we discussed our plans to send a container of humanitarian goods to Israel from ANM.

All along the way our visit was woven together providing special times with some of the young men and women who are serving in these ministries. I was most encouraged to see their zeal, inspiration, and commitment to the living God. They are determined to see the Gospel proceed from Zion and salvation and righteousness go forth from Jerusalem like a blazing torch. (Isaiah 62:1)

God’s grandchildren are taking that torch and running with it to the finish line!