Years ago when we lived in New York, I was a volunteer chaplain in the Nassau County Jail, not far from New York City. On my way back home from a Sunday morning service, I had an ancient gastronomic urge to get a bagel and a cup of coffee, which was a common feature of my Sunday mornings growing up Jewish in Long Island.

Not only did I have the urge, but also the nearby neighborhoods had the reputation of delivering the goods that I was suddenly craving.

So when I approached a sign that said “Bagels and Bialys,” I was convinced that God was in this place. He would soon prove that He was, but not in the way I was expecting.

Maybe it’s just me, but after preaching, I get unusually hungry. That morning my stomach was growling with expectation and my nose was anticipating the aroma of ground coffee brewing and fresh-baked dough coming out of the oven. To see the sign with Bialy on it aroused even more excitement because it is a specialty in the bagel world.

All that is to say how devastated I was as soon as I walked into that store. It was like jumping out of an airplane without a parachute. As soon as I landed everything in me gasped in painful shock.

Directly ahead of me, as the door closed behind me, was a magazine rack filled with pornography. I couldn’t believe my eyes.  I was totally unprepared for this inescapable sight before my eyes. My appetite immediately vanished from me as anger arose in my heart.

Pornography is a huge social problem.

On that day, what was once confined to the back alley stores off 42nd St. in Manhattan had become normalized in many towns in the suburbs. Some even had flower gardens in front of their stores and “Sale” signs posted in their window displays. It sickened me as I witnessed the demise of our culture in proportion to the growth of pornography, as it stealthfully crept its way into the minds of young and old alike.

My hunger vanished as my day dramatically shifted gears. I wanted to either scream or turn and run.

Thanks be to God though, who has taught me to be slow to anger and quick to listen.

Just beyond the book-rack sat two men with aprons on sipping coffee. They looked up as if they had been waiting for me. I realized that they must work there or even own it because the store was empty of people, so I approached them with a guarded tongue. 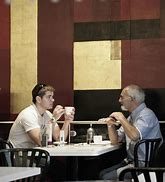 I soon discovered that they were Russian Jews who were recent immigrants and had just purchased the business. I told them I was glad for the bagels, but sickened by the book-rack.

They didn’t understand, or at least appeared not to. My heart was racing but I needed to explain. I chose to believe them.

“We call that display pornography,” I began.

“It is not good. In fact, it is damaging to this community, especially to young innocent eyes. No one should be faced with this enticing display. It almost always leads to destructive thinking and behavior. It has no place in our society.”

They appeared surprised and said that the rack came with the store.

I told them I was sorry for that, but it is now their problem and they were responsible for it before God Almighty.

I could sense conviction on their faces as they both said they want to live honorably even in this new, yet perverse land. I couldn’t tell if they were being truthful or accommodating, but again, I chose the path of love—to believe them.

They went on to tell me that they were observant Jews and understood their accountability before God but felt frustrated in their newly acquired culture.

As my heart began to beat normally, I told them about being a Jewish Believer in the Messiah Yeshua and that He has given me a zeal for the faith of our forefathers.

They agreed that they were going to trash the display right after breakfast. I departed satisfied, but no less hungry.

The following week I returned to the Jail and afterward to their store. I was hesitant to walk in, but to my delight, the display was nowhere to be seen.

They quickly recognized me and were delighted to tell me that they emptied the entire display into the dumpster.

I was so thankful. This time though, there was a line behind me, which limited our conversation.

We shook hands and I finally got to eat the treat for which I originally came.

As I drove away I thanked God for happy endings.

Now, if He would only show them the secret of making a good bialy!

Something is wrong – Abort