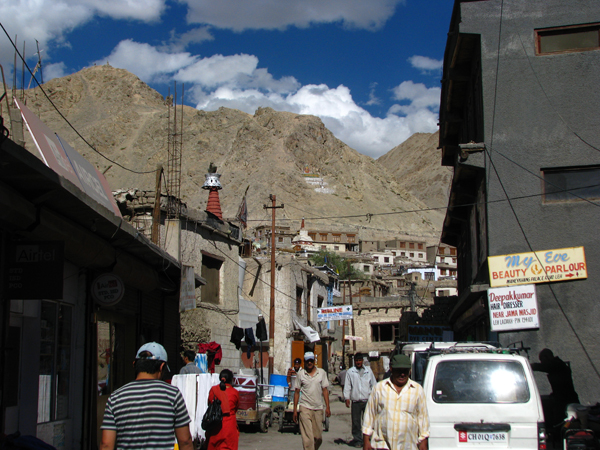 The dusty streets of Leh are lined with shops. They are also littered with stones from a “highway improvement project” that started years ago.

I hobbled along, close to the edges, to avoid the traffic of all things moveable. Like much of India, there appears to be no rules of the road other than move out of the way.

A Voice of Welcome

My hope was to meet someone who I could engage in conversation. As Jesus instructed His disciples, I was looking for a “man of peace.” My tired legs were questioning if I would find one when I heard a voice of welcome.

It was a young man sitting in front of a shop with no noticeable name and very few, but well crafted products in the window.

“Julay,” he said with a smile.

I returned the greeting, common to Ladakhies.

“Would you like a cup of tea?” he asked me. I said I would, but I was not interested in buying anything.

He answered with the typical, “No problem,” as he held open the narrow curtain for me to pass.

My conversation with Shah, the “man of peace”

Inside the tiny shop sat a small, bearded man, just the right size for the room. He stood and motioned me to sit across from him as he told his young cousin to bring us some tea.

“Your cousin is a good salesman,” I said, “but I told him I had no intentions to purchase anything.”

I assumed he planned on changing my intentions, but to my surprise, he just wanted to talk. 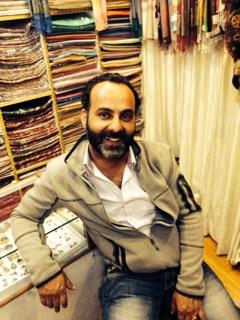 His name is Shah and he is a Muslim. He is also a fine craftsman of silver and precious stones, following in the footsteps of three generations. He initially guided our conversation. It became clear that this was the “man of peace,” for whom I was looking.

I asked him about his family and his business. As is common in the Middle Eastern custom, his trade of silver and silk was a family enterprise with shops in two locations and several employees. He was married and his wife was almost ready to give birth to their first child.

He asked about my family and what I did. I told him about my wife, children, and grandchildren, and how precious they are to me. I then cautiously told him of how I travel around the world helping ministries, which are working amongst their people to improve their conditions.

He asked me if it was a Christian organization. Knowing what “Christian” means to many these days, I explained that those who follow the teachings of the Bible and live in line with the nature of Jesus are the ones I call Christians. Historically, the name has been distorted, used by many for their own agendas, even inflicting pain for purposes that are contrary to the Bible.

As I sipped my lemon tea, he discussed the way the culture had shifted so much to one of greed and violence. He spoke out of concern.

“Shah,” I broke in, “you are a man of peace. I can tell that you are troubled by the condition of this world, and you have reason to be, especially since you are about to raise a family.”

I then told him, when I was his age with a young family, I had similar thoughts. Mine though were centered upon my concern that I was incapable of providing for them. On top of my feelings of inadequacy, we struggled financially. Other issues had arisen that made me feel that I was in a hopeless state with no one to help.

Then, I told him about Jesus

I said that I knew very little about Him, but I had begun reading about Him in the New Testament. I had read many “holy” books, but never this one. I assumed it was boring and irrelevant because no one had ever told me about it. The people I knew who were called Christians never seemed to think much of Jesus because they never spoke about Him, nor did they act like Him.

As I began to learn about Jesus, I marveled of how different He was. In fact, He was like no other figure I had encountered, either in life or through reading. That is because, even of His own admission, He was not only a good man, but He was God. And not only that, but He invited others to follow Him and receive of His nature.

“One day, I did just that. On my kitchen floor, I cried out to God. I told Him I didn’t know if He even heard me, and then I said to Jesus, ‘I don’t know who You are, but if You are God, I need to know.'”

I told Him that I was healed on the inside and the outside at the same time. That was 35 years ago, and He has proved Himself faithful ever since.

He appeared to be looking at me in a state of wonder. I took the gamble of telling him that is why I go around telling others about Jesus.

“In fact, Jesus said to His disciples that when they go out, they should look for a man of peace and bring him this news. You are that man, Shah.”

I asked if I could pray for him and he said, “Yes.”

We stood up and shook hands, each thankful for the time.

As I opened the curtain to leave, I turned to him and said, “One more thing, Shah. I am a Jew. This news is not common to my people nor yours, and here we are discussing what they both need most in a peaceful atmosphere.”

He gave me a gentle, yet perplexing smile, as I left. I wasn’t sure if he was glad I came, but I believe he will give much thought to our time together.