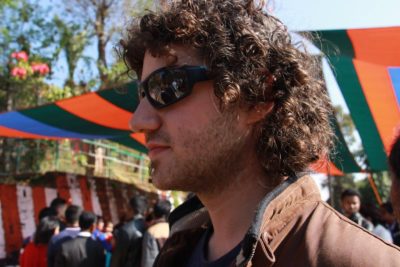 Yosef Ben Chaim means Joseph Son of Life. He is the 11th son in an ultra-Orthodox Jewish family in Israel. I met him in India.

It was an unlikely meeting, but there appeared to be nothing of the average in this young man, even though he thought very little of himself and even less of an understanding of the meaning and purpose of life. That, after all, is why many of the young soldiers of Israel’s army come to Arambol, a beach village in Goa on the coast of India.

Orthodox Jews are not obligated to serve in the IDF, unlike other Israeli youth. The men serve for three years and the women for just under two and a half. It is an unimaginable way to transition from childhood to adulthood through the tunnel of warfare, but in a land where all your neighbors plot and pray for your extinction day and night; there are no alternatives.

Many of these youth travel to India at the end of their service where they can live together in micro-community. They are either trying to find answers to life’s deepest questions or to forget about life altogether, burying their thoughts through drugs, alcohol, and promiscuity. A leading factor in their search for meaning is that they have had little or no knowledge of the Gospel.

Throughout history, few Christians have crossed the invisible “boundary line” to bear witness of the greatest story ever told. However, in recent years that has begun to change as many Gentile Believers have beautifully expressed genuine love and concern for the Jewish people by the Spirit of God. Together with a rise in the population of Jewish Believers in Israel, there are growing numbers of those who labor in the same fields in which Jesus and His disciples once walked.

Of mutual concern is the lost state of the Israeli youth who have fought for the freedom of not only Israel, but the entire Western world. Yet they feel hated and misunderstood. I feel compelled to do something about it.

My journey began with a team of two, myself and my friend of 55 years, Alex. He came with me to India four years ago. At that time, I told him we had done a lot of damage in our days together, it is time we do some good.

Arun and his wife are the Indian leaders of a ministry to the children of Temple prostitutes. We began our journey assisting their ministry.

Arun came with us because for decades he has had the desire to see ministry to these lost Israeli youth. To my surprise, not only has he and his wife been praying for God to move among the Israelis, but so has their entire staff, along with the 40 girls under their care. Before we left their compound, I shared a message of our vision and through tears and deep supplication, they prayed for the Lord to make His Presence known throughout our visitation.

Without question, the unseen member of our small team was the tangible presence of the Holy Spirit. There is no other explanation for the opportunities which arose in only a few days.

Arambol is a dark place spiritually. It is thick in Hindu custom. Open air markets filled with hand-made and hand-woven goods line the tiny streets and serve as constant reminder of their polytheistic culture, which provides an atmosphere void of moral boundaries.

Breaking into meaningful conversation was something only God could arrange. I have learned He does so in natural-supernatural ways, which always call for discernment and a bit of courage.

Soon after we arrived, the sun began to set as our hunger arose. We walked along the beach looking for a suitable place to eat. Beneath the growls of my stomach, I had a prayerful conversation asking God to lead us. He did with this episode as well as those to follow. His footprints were in the sand.

When it comes to finding a restaurant, cost and cleanliness are factors to us, but in India, American standards have to fade. When we arrived at one that seemed suitable, Alex noticed a young man, alone on the sand, trying to juggle, and asked him if he could try. Then I came over and asked the same. After we both realized we couldn’t see, we humbly gave up and gave him back the balls. He laughed at our attempts and had no trouble humoring us. We asked him if he would like to join us for a meal and he did.

Yosef began to open up to us right away. He withheld nothing, especially that he was in Goa for the attempt to find life’s meaning, if indeed there was one. If not, he was not sure what he would do. That troubled me.

For him to embrace the Gospel would be an immediate end to his relationship with his ultra Orthodox family. They were Lubavitcher in background and two of his brothers worked for Chabad, a very vocal arm of Judaism which seeks to reawaken the faith in those who have departed and guard against any missionary activity. To say yes to Jesus would mean to say goodbye to his family.

He would be dead to them, a very costly price to pay.

To have conversation with someone with Yosef’s background is a very rare opportunity. If we were to have any impact on him, there could be no sign of deceit or hidden agenda. Although he spoke English well, I spoke to him in Hebrew. He was surprised and asked me how I knew. I told him I was Jewish and his face lit up. I also told him that I was extremely grateful for his service in the military. He was taken aback. He never heard that before. It was a very common response I have heard from the dozens of soldiers and police that I have met in Israel.

I tell them that they defend the freedoms of the entire Western world and I am not alone. There are many Christians who feel the same and I pointed to Alex and Arun. I said they loved Israel and they loved the Jews.

“You are safe amongst us, Yosef, because of their genuine love of Yeshua, the Jewish Messiah.”

Even though I could barely see his expression through the one dimly lit candle on our table, I knew it was not a smile.

I grabbed another candle from a table nearby and sat down again. His face was clearly serious and he boldly said, “You cannot convince me about Jesus, it goes against everything I have ever learned. If Jesus was Messiah, the Rabbis would have known.”

“The Rabbis were not always right, Yosef,” I told him. “If they were, you would not be here.”

He had already told us about his strict upbringing. For three years, his parents sent him to Brooklyn to train amongst the Chabad. Then one day while putting on his tephillin, the leather bands the observant don each morning and evening as they recite certain prayers, he had an “epiphany”.

Soon after that he joined the army and his life took a dramatic turn.

He had been in India for three months. He even met a Christian family in another section of India. They invited him in their home to stay, which he did for a month. He liked them. One of the daughters was a part of YWAM. I asked him how that went and he said they were very kind to him, but not convincing.
I was convinced though. God’s eyes are on this child.

“Then what happened?” I asked.

“I came back here and started using psychedelics. It is what makes me feel alive. In fact, I took some THC (concentrate of cannabis), not very long ago.”

“You don’t seem like you are high,” I said. He told me it had begun to wear off.

“For me, hallucinogenics are holy. They should not be abused. This is how I want to live my life.”

“Yosef,” I said endearingly as my heart began to break for him, “You are far more than what the drugs will make of you. You are a man of courage. Look at you, you have left family and country and alone you travel in a foreign land. You have a heart of compassion and communicate clearly. God has made you in His image and has a future for you way beyond a drug experience. Alex and Arun also began to speak truth into his life. Later we agreed that he had a sense of finality to his experimentation. If drugs did not lead to a meaningful life, it might be his last attempt.

“Please listen to me Yosef, I was once much like you. I thought getting high was the answer to my troubled mind. It was not, nor is it yours.”

“When I finally gave my life to Yeshua,” I continued, “it was the first time I truly became high.”

I told him about the New Covenant spoken by Jeremiah and Ezekiel.

“God promised to give the Jews a new heart, a new mind, and a right spirit. God never intended for man to live by a set of rules, ‘do this and don’t do that.'”

“He offered that promise because man had need of more in order to overcome sin and live a righteous life, serving others, not just wrapped up in having wild experiences. Living daily with God is an adventure like no other. It began for me over 35 years ago and has never stopped.”

“It is no accident that we met you. We prayed for God to lead us to someone who needed to learn of His love. You are the one, Yosef.”

He made it clear that he was not ready to believe, but he needed to hear one last thing.

“Go on with your search, Yosef, but be careful. It will not always be this new and exciting. It can get very scary and dangerous. But don’t lose heart and don’t even think about giving up on life. You are made for better things and there are people who will need your help once you come through. Yeshua loves you and awaits your companionship.”

He told us he was very happy and thankful to meet us. I gave him a fatherly hug, as did my companions, knowing we may not meet again. We didn’t. But I am confident Jesus will.

Calev and the Subtle Nature of Divine Orchestration