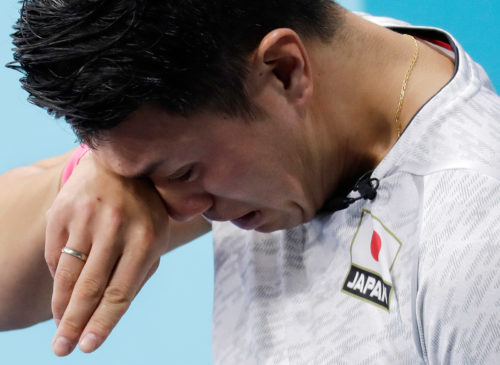 Tsuyoshi Yamaguchi cries after Japan lost a curling match against South Korea on February 21. Aaron Favila/AP
Many years ago, God revealed His plan for humanity’s well being and a life worth-living to a man named Abraham. Even further, he gave to Abraham the means to succeed. He gave him the “blessing.” He then explained His broader purpose for this blessing, It was so that all the families of the earth would be blessed and through them all the nations of the world.

Where is that “blessing”?

Well..the story continues. The blessing would pass through Abraham’s descendants, specifically Isaac then Jacob. From Jacob it would pass to his sons, who would become the twelve tribes of Israel.

The problem for many is that God is singular and so is His plan to accomplish His goal. Simply put, if you need gas to run your car, you go to the gas station, not the drug store.

But man does not like this “one way” philosophy. He prefers a menu of choices. The result is we have a planet full of nations who remain clueless to the plan of God and choose their own path which has been historically terminal.

It never ends good for the nations, nor its citizens.

One day though, a Frenchman, no doubt well intentioned, came up with the idea of the Olympics, one in which all the nations could participate. In 1896 the first one was held in Athens, Greece.

I like the Olympics, though I confess, skating in circles does not rivet my attention. The concept is great. I love the stories of perseverance and overcoming difficulty in order to make the grade to compete. My problem is that the enormous effort accompanies an inestimable cost of time and money, which leaves us no better off as a global community. How are the families and the nations of the world any better? Is the striving for gold and silver (bronze doesn’t quite cut it), really worth it? Where is the benefit? Where is the blessing? Is this really the best we have come up with after 20 centuries on the global stage?

How about the athletes? Have we followed the recent aftermath? What about our American daughters who trained for years under the professional care of a demonized pervert? How did that go undetected for so long? What is their long-term effect?

Are we that detracted from God’s intention for us which is intended to inspire and benefit one another?

I have a suggestion. It is what the Jewish sages called “Tikkun Olam”. It means to “repair the world.” No small task. It is a large topic.. In fact many of us Jews believe that we have been kept from centuries of near annihilation because the earth has not yet been fixed. As with everything Jewish though, there are a multitude of opinions of how it works.

It begins with the call of Abraham to be a blessing along with his descendants. It gains further traction with the prophets proclaiming the Israel has been called to be a light unto the nations.

These ancient and modern sages interpret these as meaning that the Jewish people need to be in position to help humanity improve. It may help to consider why we have a disproportionate population of Jewish doctors, dentists, scientists, lawyers, accountants, authors, musicians, and perhaps most importantly, comedians. What better way to make the world better than with trained professionals?

Actually there is another way and it is a better way, because it is God’s way. As well intentioned as repairing the world sounds, it is as superficial in the long run as a band-aid is to terminal cancer. That is because man’s problem is terminal.

We all die in the end. Then what?

If our hope is only in this world, what good is it for you when your life is at the finish line?

The “blessing,” which originates in God is spiritual and it is eternal. For it to be recognizable though, it must work on here on earth in the hear and now. The effect of the blessing is engineered to benefit the neighbors of the one blessed and has the potential to reach into the nations. It begins in the heart and mind of the recipient. However it is not self-generated. It must come from God and be received willingly.

Without further suspense, the source of the blessing is Yeshua, the Jewish Messiah, the descendant of Judah, one of the sons of Jacob. He is also the rightful KIng of Israel. The singular God gave His only begotten Son for this reason, that we may have eternal life and life abundant in the here and now. This manifests as men and women and children become a blessing through word and deed, but never shying away from this all-inclusive message, which excludes every other one. Yeshua, Jesus is the Way.

What does this have to do with the Olympics?

Here is my idea.

Instead of training incessantly to skate in circles, race down a slope, or frantically sweep a disk across the ice (curling), all for a piece of precious metal, why not train for something that would benefit the nations, rather than compete against them?

The solution is Tikkun Olam

“Wait a minute, Paul, you thoroughly trashed that concept!”

It seems that way, but here is why it can be in keeping with God’s single intention from a single source.

Jesus said, “If anyone’s will is to do God’s will, he will know whether the teaching (His) is from God or whether I am speaking on my own authority.”

It is always God’s will to do good. Of course He judges our motives. In the process of doing His will, He discreetly draws our hearts to Him because He is the source of our intention. In that process Jesus shows up, subtly at first. When He does though, it is up to the individual to decide whether or not to pursue HIm. He uses our earthly intentions to point to His eternal one. It is an ingenious tool for evangelism.

If the Olympic competition was in the realm of well-doing, the training would be likewise. For example, what if an event was in shoveling snow and the training was in your neighborhood or your parents driveway? How about competing in laying shingles and the training was on the widow’s roof, or the disabled veteran’s? The competition may not seem as exciting to watch, but the audience would benefit from the beginning as would the athletes benefit life-long.

I know sponsors like Pepsi Cola and Toyota may not agree, but wouldn’t it inspire a generation to do something that is in reach and that improves the world which is in desperate need of repair? This is not a utopian dream. God’s will is that all would be saved and come to the knowledge of Him. That is the ultimate blessing.

If nothing else, why not take our message from the Bible, rather than from Greek mythology and begin to train the next generation to serve others rather than themselves?