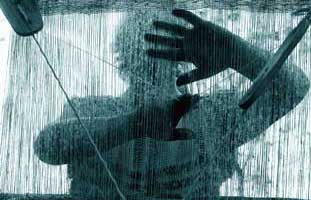 And he found a certain Jew named Aquila, born in Pontus, who had recently come from Italy with his wife Priscilla (because Claudius had commanded all the Jews to depart from Rome); and he came to them.  Acts 18:2

Paul was alone. Actually, we know that he is never alone, that the Lord is with him, but he was without human companionship. But the Lord had a couple He was going to bring into Paul’s life and him into theirs.

The Lord moved them from Rome to Corinth; God knows exactly what He is doing!

They had the common ground of being tentmakers. Paul was always willing to work hard with his hands to support himself. This couple would become an important part of the Body of Christ and Paul would write of how they later risked their lives for him. He was thankful for them.

This couple that would have a church in their home, and so the Lord was up to way more than just friendship and help to work and make a living. The Lord had brought these lives together for an eternal purpose in His will and plan.

As I say, the Lord was up to stuff!

I have served the Lord for over 38 years. I have been amazed at times the stuff the Lord is up to. Looking back, it has been truly amazing the way He has woven lives together and brought people across our path for a greater purpose.

Years ago, I was asked to do a radio interview about the jail ministry. As the interview ended, they asked me to give a contact number in case anyone wanted to get in touch me with.

But there was this Jewish carpenter, Paul Robbins, who was working and wrote the number down on a two-by-four. Two weeks later, he saw it and thought too much time had gone by, then decided to call anyway.

He came into jail to visit a service and fell in love with the ministry. He labored with me for ten years, what a blessing he was in sharing Christ.

One day, I was talking with him. I had been doing some ministry in Florida; it turned out his good friend is the head chaplain for the whole state. The Lord used that to allow me entrance into a number of prisons in Florida. It has been a great blessing as I have been able to spend a full day, sometimes more than a day, teaching the Word of God and doing seminars about Freedom, Hope, Discipleship etc.

But all that was because a Jewish carpenter called after two weeks, the only call made to me was right on time!

The Lord’s work is amazing!

May we look at this day with expectancy, knowing that He is up to stuff!

There are no accidents in our lives as believers, no coincidences.

He is the Master designer, weaving together lives, circumstances and situations for His greater will and purposes which is always the “saving of many lives” (Genesis 50:20).

Pastor Kevin Henesy is the Senior Pastor of Long Island Calvary Chapel in Holbrook, NY and Senior Chaplain of the Nassau County Jail.