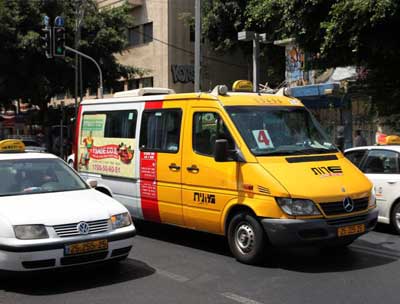 In Israel, a Sherut is a mini-van driven by a professional. If you need a ride for more than 4 people and can’t take a public bus, you need to hire one.

In the Old City, there are many available, but not many are honest. At the guesthouse where we stay, they recommend honest drivers. When I need a ride to the Tel Aviv airport, I want an honest driver.

Kalil (alias) arrived on time, but looked very tired. I sat up front, partly because I speak some Hebrew, but mostly for the opportunity to have a meaningful conversation if he speaks English.

I greeted him as Michael, but he corrected me. Michael was sick. He called Kalil at 2AM to ask if he would drive us to the airport.

Before long, we were on to Jesus. On his dashboard was a postcard of a boy steering a boat with Jesus standing behind him. It reminded me of when I was about 10 years old. I ordered some religious pictures of Jesus from the back of a comic book and sold them door to door to the Catholic families in our neighborhood.

“Is that a picture of you as a boy with Jesus standing behind you? ” I asked.

“No, I didn’t really know Jesus then, ” Kalil replied.

“Does that mean you are a Believer?” I continued.

“Tell me how that came about.” I wanted to be assured.

He began by telling me he had four bouts with leukemia since he was a teenager. On the third time, he surrendered to Jesus.

“Tell me what happened,” I asked.

He told me that his older sister got saved, then his other sisters, and then his parents. On his third assault of cancer, he began to cry out to God for help. His older sister who was fasting and praying for him through the night came into his room and told him he must turn his life over to Jesus.

Through his pain, Kalil cried out to Jesus for mercy and gave Him his life. The next morning, after his worst night ever, he felt completely better.

I waited to consider his story. I hesitated to ask the next question.

“You told me you had leukemia three times. That means the fourth time it struck, you were a Believer. It happened after you were saved. Did you question God why or doubt your experience with Him?”

“Not at all,” he firmly answered me. “I knew He was with me. There was no question.”

I sensed another lesson coming.

“Kalil, do you know what theology means?” He said yes.

“What you are saying is that you have a clear understanding of a “theology of suffering.” He nodded.

“Kalil, you are telling me that even though you had 3 occurrences of cancer, and were struck again as a Believer, you still trust God?”

“Of course,” he said, wondering why I was even asking.

I liked this guy. Not only that, but I admired him and suddenly realized that this meeting was clearly ordained. I needed to know more. He told me that his father built a church in Ephraim along with a guesthouse. He is not a pastor. He built it by faith. He showed me the photos. They were beautiful. They are expecting visitors to come and a growing faith community. His father has been building for 10 years by faith.

“I suppose you are in a minority.”

He told me that 48 of the taxi drivers in that part of the Old City are Muslim. Two drivers are Believers.

The Arab Believers are only 0.5% of the population. They are persecuted by both Arab Muslims and nominal Arab “Christians.” As is often the case, the name “Christian” is a religious label, not an indication of a relationship.

“What about the Jews?” I asked.

“Growing up, I hated them. We were taught that they hated us. It was natural to hate them,” he replied.

“What about now?” I continued hesitantly. He didn’t know I was Jewish.

“Now, I love the Jews.” He was quick to respond.

“Is that because of Jesus?”

“Yes,” he went on with a look of determination. “If it were not for the Jews, we would be destroyed. They protect us. We all think this.”

At that point, we entered the airport and came to our first checkpoint. The Israeli soldier looked at his license and saw he was Arab. She asked the passengers in the back some questions and then told him to pull over. Kalil did so, but he looked fatigued.

I told him I was sorry. He nodded knowing this was how it had to be.

After more questioning and waiting, they let us in. When he dropped us off, we embraced with the intention and hope to meet again.