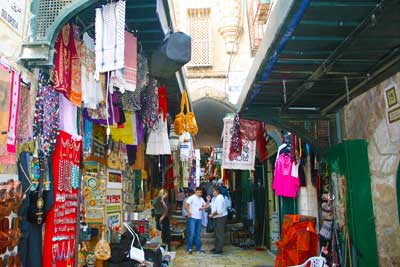 In the Old City of Jerusalem, worlds collide and cultures divide.

The area is literally divided into four quarters. The tension becomes tangible at times. This was my third stay in this section where the Armenian, Christian, and Muslim Quarters touch.

Farhan, a man of peace

I have come to recognize shop owners and they me. One young man, whose name is Farhan (alias), was sitting outside our guesthouse with Jason when my wife and I walked by. Farhan is a Muslim shopkeeper with an eye for a sale. He and his many cousins have several shops. If a buyer does not see what he wants in one, it is very likely they will be shown countless options in another in very convincing ways. I was glad to see Jason and Farhan engaged in conversation. I like Farhan — I told him, he is a man of peace.

Peace is not an uncommon discussion in Jerusalem; it is a longed for reality. Very few though, consider it likely to happen. Farhan was very careful with his words in regard to who is to blame for the current situation, but he is very skilled in his approach.

Time seems to have stood still in this neighborhood. They view centuries as we do years. The greed for oil by Western governments is the root of unrest, according to Farhan. It became clear that our conversation had to be steered away from the troubles of the world, to the troubles of its inhabitants if our time was to be meaningful.

The voice of a larger community

Farhan’s voice is that of a larger community.

He said that in his culture, family is of the highest value. In ours, it is money and things. Our youth are spoiled and disrespectful, theirs are not.

Farhan likes to talk and we let him. I know he appreciated that.

He went on to say that is why they do not have the troubles that we do in America. As he went on though, he came to a dead-end. He began talking about Muslims killing Muslims and found it hard to place the blame elsewhere.

It was a perfect opportunity to identify the need we all have for not only forgiveness of sins (which he considered a Christian problem), but even more, we need a new nature to live by, without which, there will never be peace between peoples.

Just ask Jesus if He is God

We told him about some friends we had who were Muslim-born Believers in the Jewish Messiah and they are now a part of the church. I told him that Marla and I are Jewish Believers and that there are many like us in Jerusalem.

He had a shocked look on his face and then asked, “Do you mean being born-again?”

It was as if he had heard that before, but never knew what it meant. We gave him a challenge to do what I have done and countless others, just ask Jesus if He is God, Who came in human form, and He’s not simply a different god. Farhan had a puzzled look on his face, but we sensed God was at work.

It was a good way to end the conversation before the enemy stole it away. Farhan didn’t even get the chance to persuade us into buying something.

Miracles are still happening in this Land!