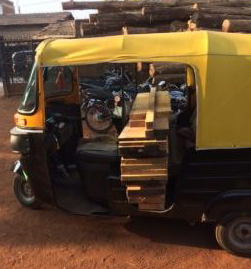 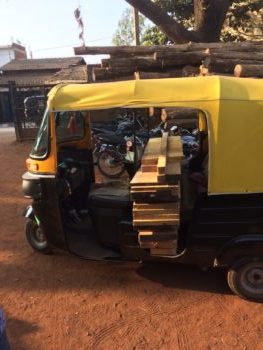 We came to Dharwad to be of assistance to the ministry of Caring Hands. Our plans were to train three pastors in the use of tools and basic carpentry.

Since we cannot bring tools with us, the challenge in India as in most countries is to find the needed tools and materials that are made well enough to endure beyond our time and be used by those we train to continue their labors and become employable as well as meet the needs of the ministry. Without a capable translator, this would be an unlikely task.

We began in the lumber yard, which in western terms would be more like a saw mill. Logs were piled high around the perimeter of the yard and sawdust reached the ceiling within. One flame would turn the place into a blazing oven.

Not surprisingly after ordering the lumber, we were told by the barefoot foreman that he would not have it ready until late the next day. It sounded disappointing but it gave us the necessary time to hunt for tools and hardware. It became quite an education.

We began looking for power tools, something of which they were completely unfamiliar. All the stores in Dharwad were on the streets, literally. You walk from the edge of the street to the counter and the guys inside would look for what I described and typically came up with something else. I drew pictures to help and was handed catalogs to point to what I wanted.

After exhausting our possibilities we went to the hardware store. They did not have the tools either but we purchased nails and screws after they brought out samples of the possible choices. It took about 2 hours, I jokingly asked if they had any coffee. Five minutes later one of the men came out with three small glassed filled with very good Indian coffee. Then he brought plastic chairs for us to sit and enjoy. By the time they gathered our nails, screws and glue, it was dark. That did not stop them though from cutting the screens we ordered (to keep the mosquitoes from spreading malaria in our room) on the sidewalk where we stood.

By this time we were like old friends so we took photos of them. They even invited me behind the counter to stand next to them. It was time to say goodbye, but not without telling them about Jesus who was not just one of the many gods but God Himself.

Since we ran out of options for tools in Dharwad, a city of 400,000, we headed by bus to Hubli, a city of millions where driving rules are a suggestion often ignored. Within two minutes of stepping into the bus, I was thrown across the aisle by a jolting turn. I quickly learned that holding on with one hand is suicidal. I grabbed the nearest pole with my other hand and held on for life as my guts pulsated through speed bumps and divots that sent my organs to flight within me.

We arrived in Hubli intact and began another adventure in futility as one store after another fell short of meeting our need. We again walked from store to store as we were directed, risking our lives each time we crossed a street. Finally we took a cab to another section of the city. As a last effort, our translator John told us to wait while he walked into another store to inquire. I stood on the sidewalk and asked the Lord what I should have asked earlier.

“Isn’t there a store somewhere that we can actually walk into that has the tools on a shelf that we need? Please show us where it is!”

Within a minute of making my request known unto God, I turned and noticed a tool sign in the store behind me. As I walked closer my eyes opened wide to see tools. I felt as if I were a child on 5th Avenue at Christmas time.

Power tools! Shelves were filled with them, neatly arranged in categories.

We walked in and began the easy process of choosing the ones we needed at the best quality we could afford.

I told the owner of the store, Axil, how amazed I was to find his store. I also told him how I prayed only moments before for a store just like this one. That led to a long discussion. He was quite interested to know where we were from and what we were using the tools for.

Without telling him names or locations I told him about the rescue mission of the children of temple prostitutes and the incredible lives they live of hope and joy due to the sacrificial love of two people who could have easily turned their heads from their needs if it were not for the love of Jesus. His love tends to interrupt His followers lives with new mission and purpose. He was intrigued to hear more but his store was filling with customers.

After purchasing some hand tools along with the power ones, we decided to get a cup of coffee while they bagged our tools and tallied the bill, a process that tends to be quite lengthy in India.

When we returned Axil wanted to hear more about Jesus. He told me he was a Jain and was very concerned with helping the poor. I listened to his story of what he hoped to do with his increased wealth to help alleviate poverty.

“You are a man of peace Axil, and a man of excellence. I have not seen or heard of anyone within miles who provides the tools that you have, which will help us to help the poor as well.”

I cautiously explained to him what we aimed to do in training and equipping leaders to learn skills to earn a living and teach their young people to do the same. He was intrigued by the unique nature of our intended efforts. I assured him it would be impossible apart from Jesus at work within us and those whom we will train to serve the poorest among them.

I asked him if he had read ever read the New Testament and he said he did. In fact he considered himself extremely informed. At one time he read 18 hours a day. Now he is too busy. I wanted him to see Jesus but like many polytheists, there was a wall of defiance. Not wishing to rob his time from his customers I left him with what Jesus said of Himself that “if anyone desires to do My will, he will know if My words are from God or they are My own.”

“Jesus will multiply your efforts when you turn to Him with all your heart,” I said. “I will pray for that day, Axil.’

By the end of the following week we were able to build a dining table, benches, shelves, bird houses and repair a chair with the “hidden tools of Hubli,” along with the labors of the three pastors and several of the girls who eagerly joined us after they finished school. I couldn’t help but consider that if not for this ministry, these girls would be following in their mother’s footsteps.